I am excited to announce that Skulldust Circle is working on an anthology of short stories! The main goal here is to give our fans and readers who may not know us or that may only know one of us, a sampling of our writing styles. So far, we are putting together stories based on whatever worlds we’ve already created. That should be happening in the next 2 weeks or so, if all goes according to plan, so keep your eyes peeled! We are still in the latter stages of development, but once the book goes live, we will certainly let you know.

Possible titles: ‘Skulldust Circle’ (I know…weird, right?) or ‘A Gathering of Dust.’

The tome shall include works from William Kenney, Jeremy Laszlo, Ross Kitson, Ben Martin & Gary Vanucci (me) at the moment. I don’t pretend to know what the others are writing about, but I expect them to make comments possibly on what it is they are doing or even do their own posts with explanations to that end.

My story is about the scorching drake (more commonly referred to as a red dragon) that started it all: Ashenclaw! Ever want to know what happened those years ago when the land was burnt to ash by the scorching drakes? Ever wonder where my realm got its name? Wonder no more!

And the best part about the whole thing is that I involved some of my friends that I used to play certain MMO’s with and I was able to put a good deal of them into the story! It was a ton of fun to write and I hope that the readers really enjoy it, especially them! The story is simply entitled ‘THE LEGEND OF ASHENCLAW’ and it runs approximately 21K words. I look forward to feedback and would love to hear your comments about the whole Skulldust Circle project!

As of today I have pulled all of my 99 cent single short stories in the WOTHLONDIA RISING series that I had released since January of this year. In their place is the Anthology, now on Amazon kindle AND in Paperback, which includes ALL 5 of the short stories (Distant Familiarity, A Rose in Bloom, Maturation Process, Tears of Blood, Strength of Faith) and includes a never-before-released story about the half-ogre barbarian, Orngoth, called Reflections.


As an added bonus, the prologue to Covenant of the Faceless Knights follows the story entitled Distant Familiarity which details the events just prior to Covenant. So, as you can see, this is a worthy addition to the Realm of Ashenclaw series and I have given it the name: Beginnings Book 0. It adds depth, history, character and gives you a glance into events that placed these heroes on the path they now walk. If you enjoyed Covenant (and even Secrets of the Ebonite Mines, which is also available), I would recommend you stepping into the past of these exciting characters and learn a bit about what makes them tick!

As an incentive, I have reduced the cost from $2.99 down to .99 cents until the end of July! I hope you take the time to check it out and look forward to any and all reviews you might give. 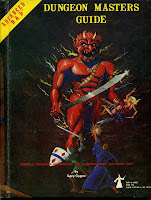 There’s a list in the back of the 1st edition AD&D Dungeon Master’s Guide that always proved fascinating to me as a DnD loving child. It’s tucked away on p224, Appendix N, between Conjured Animals and Encumbrance of Standard Items (not areas of the book I used frequently it must be said).

The list is of ‘Inspirational and Educational Reading’ and was written by Gary Gygax as a sort of source guide for the things that inspired him to write DnD the way he did. What interested me as a kid was that UK book stores never seemed to have half of these authrors. The main fantasy books at the time I found were Donaldson (which I skipped), Eddings, Brooks and, latterly, Hickman and Weis’s Dragonlance. Yet I dug around then and found Robert E Howard, Michael Moorcock,  Fritz Leiber, HP Lovecraft and, of course, JRR Tolkein.

Ironically, in this series of posts on books that influenced AD&D, and thus influenced me (and I suspect most of the Skull Dust Circle) in my writing, I plan to start with books that I have read recently from that mighty list. These include Jack Vance, Poul Anderson, and Roger Zelzaney. The likes of L Sprague De Camp, Fletcher Pratt and A Merritt are on my radar to read eventually.

Jack Vance’s seminal series Tales of the Dying Earth was published over a thirty year period, with the third and fourth books (Cugel’s Saga & Rhialto the Marvellous) published in the early Eighties, and thus not a direct influence on Gygax.

The first book, The Dying Earth, is essentially a collection of linked short stories about inhabitants of an earth far into the future, where magic and science have merged together, and most recorded history is long lost. It takes a while to get settled with Vance’s prose, but once you do it is simply excellent. The tales involving mages are particularly good, and the basis of the AD&D magic system (in its first incarnation) arose here. Spells are learned, but once used disappear from the mind, until refreshed after rest. The good old Prismatic Spray pops up here, along with the penchant for eponymous dweomers (Phandaal’s Gyrator; Felojun’s Second Hypnotic Spell).

The second book tells the story of Cugel the Clever, and how he falls afoul of Iucounu, the Laughing Magician. The title ‘The Eyes of the Overworld’ refer to a magical rose-tinted lens that Cugel is sent to fetch after a burglary goes awry. He is encouraged in this quest by having a clawed demon grafted into his liver. Cugel is a wonderful anti-hero: a cheat, a liar, a coward, a rogue, a thief. He feels his wit is quicker than it is, although he still cons a fair few people on his long journey back to Iucounu. In most encounters he comes off the worst, yet you can’t but help root for him. Cugel was an evident inspiration for the thief character class in the original game, and Gygax had admitted as such in interviews he gave over the years.

The characterisation in Vance's Dying Earth quartet is excellent. He creates a selection of bizarre, verbose and articulate characters whose dialogue fizzes along. There were moments when the spectre of Blackadder rose in the verbal fencing, and I chuckled at many of Cugel's witty remarks.

Vance’s work offered a number of other things to the DnD game—Ioun stones, The Robe of Eyes, Evard’s Black Tentacles—but the influence of the magic system (and the love of eponymous spells) was the greatest contribution.  I really enjoyed reading the book and would say it’s definitely worth the time, although gentler than more modern fantasy offerings.

My review of the book on Fantasy Book Reviews is here
Posted by Ross M Kitson at 3:37 PM 2 comments: 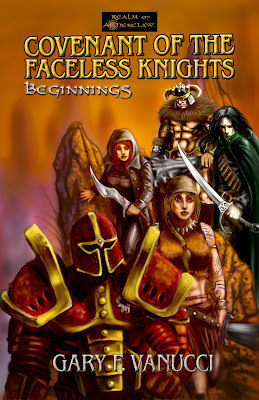 Gifting FREE copies of my debut novel, Covenant of the Faceless Knights thru JULY 4th in exchange for reviews. I would like to get a few more reviews up on both Amazon & Goodreads (copy and paste is fine). I would like some avid/voracious readers that can get the reviews up in 30 days or one month’s time. The limit I have set is between 50 and 100 copies, first come-first served, so you may have to hurry.

Criteria: This is pretty simple

That’s pretty much it!

In order for redundancy, please leave me a comment here on the blog and say ‘I’m in’ or ‘Yes, I’ll review it for you’ or something along those lines as well as your name. I will look for your email to send you out a copy.

This is not until Sunday, so if you feed me your information before then, I will be better prepared! Hope to see plenty of contact forms before Sunday!